How To Select A Reliable Battery For Your Home Inverter?

How To Select A Reliable Battery For Your Home Inverter? 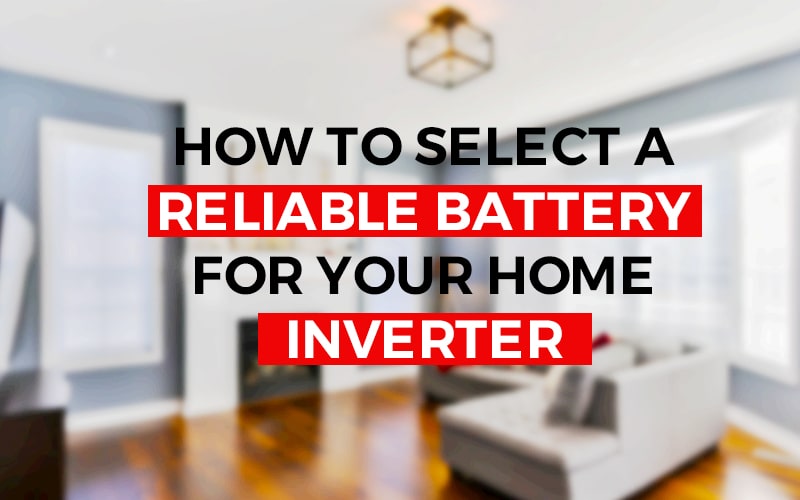 In order to go for buying an inverter equipped with the latest technology, you generally rely on various advertisements that show the best reviews of inverters. You can even have a rough idea about how these inverters are going to perform under various workloads.

But have you ever thought about its core unit?

Yes, about the inverter batteries.

Have you ever just picked one, hoping that all the batteries are the same?

Well, if yes, then, it is a piece of bad news for you because although all batteries, in general, seem to be the same, yet there are ample differences between the ones that are reliable and the ones that are a bit more reasonable.

In general, a battery that costs more also has better performance ability and longer life than those batteries rated for the same capacity. So, how do you know which one to go for? Well, let us have a look at some essential tips to picking yourself a decent battery that won’t make you bankrupt and will serve you even well in the long run.

Tubular inverter Battery or Flat Plate Battery: A Flat plate battery has a small form which is an ideal choice for a place with limited space. These batteries will fit in almost any space. However, because of their intrinsic construction, these batteries tend to have less service life than Tubular batteries. On the contrary, Tubular batteries have a significantly high service life, but it requires more recharge duration after a long power cut. Therefore, a tubular battery is best suited for the areas in India which suffer from long power cuts, whereas, for short and frequent power cut situations, flat plate batteries will be the better option. No matter how the flat plate batteries and tubular batteries are constructed, the performance and life of any lead-acid battery depend on two major factors- how pure the raw material is and how is its manufacturing process. Therefore, it is always advisable to go for a trusted brand like Tesla Power USA, which manufactures reliable and efficient batteries.

Maintenance: Every battery requires some amount of maintenance at periodic intervals. However, tubular batteries require less maintenance as compared to flat plate batteries. They can hold an abundance of distilled water, resulting in drying out less quickly.

Weight: It is always advisable to measure the weight of the batteries before buying them apart from assessing their quality, as it is believed that a heavier battery will use higher quality electrolyte plates that will give them a longer lifespan.

Batteries are considered the powerhouse of inverters; where inverters regulate the electric charges from the batteries, the batteries are responsible for holding the backup power. Tesla Power USA is one of the most reliable brands in making backup power storage units and is cost-effective in the long run. Visit the website teslapowerusa.in to get a wide range of inverter batteries and buy the battery as per your desired backup during power cuts.